Flame From Your Stage Has Now Spread to the Floor

In the morning I moved from the Manzanita Lake Campground to the Butte Lake campground, which is towards the other end of the park. It has substantially less infrastructure and is less scenic, resulting in a substantially smaller crowd—there were only two other occupied campsites.

I got off to an early start, mentioning to an older Scottish couple my plan to hike all day, and that they should get concerned if I was not back by 6 PM.

From the campground it was a nice walk to the base of Cinder Cone.

The hike up Cinder Cone is difficult on a very steep, totally featureless slope of small loose black rubble. With every step the earth slides a bit. There is no place to rest, sit, or find purchase with your hands.

Once on top, the views are spectacular. Back from where you came you see pine forests heading into the mountains. The caldera is a mix of blacks and reds, and on the other side of the mountain are the Fantastic Lava Beds—lava flows from previous eruptions—and Snag Lake, with other volcanoes in Lassen National Park visible in the distance.

Coming down is substantially easier—the path is longer and thus less steep. Towards the bottom the scoria gives way to larger stones, with some scrambling or larger steps between boulders.

I followed along the edge of the lava beds until I came to Snag Lake. I considered scrambling along the boulders to cut the path short, but decided against it, as the boulders were piled steep, and looked sharp.

I stopped for a snack, and when I continued, I walked for a few minutes before realizing I had left my hiking poles. The best decision I may have ever made was to go back for them.

I walked along the shore of Snag Lake, which was substantially lower because of the prolonged California drought.

When full, Snag Lake has a spit of land that stretches towards the right shore. In the drought conditions, though, the spit was a full isthmus, partitioning the lake. Cutting across would save about 1.5 miles and some substantial time. 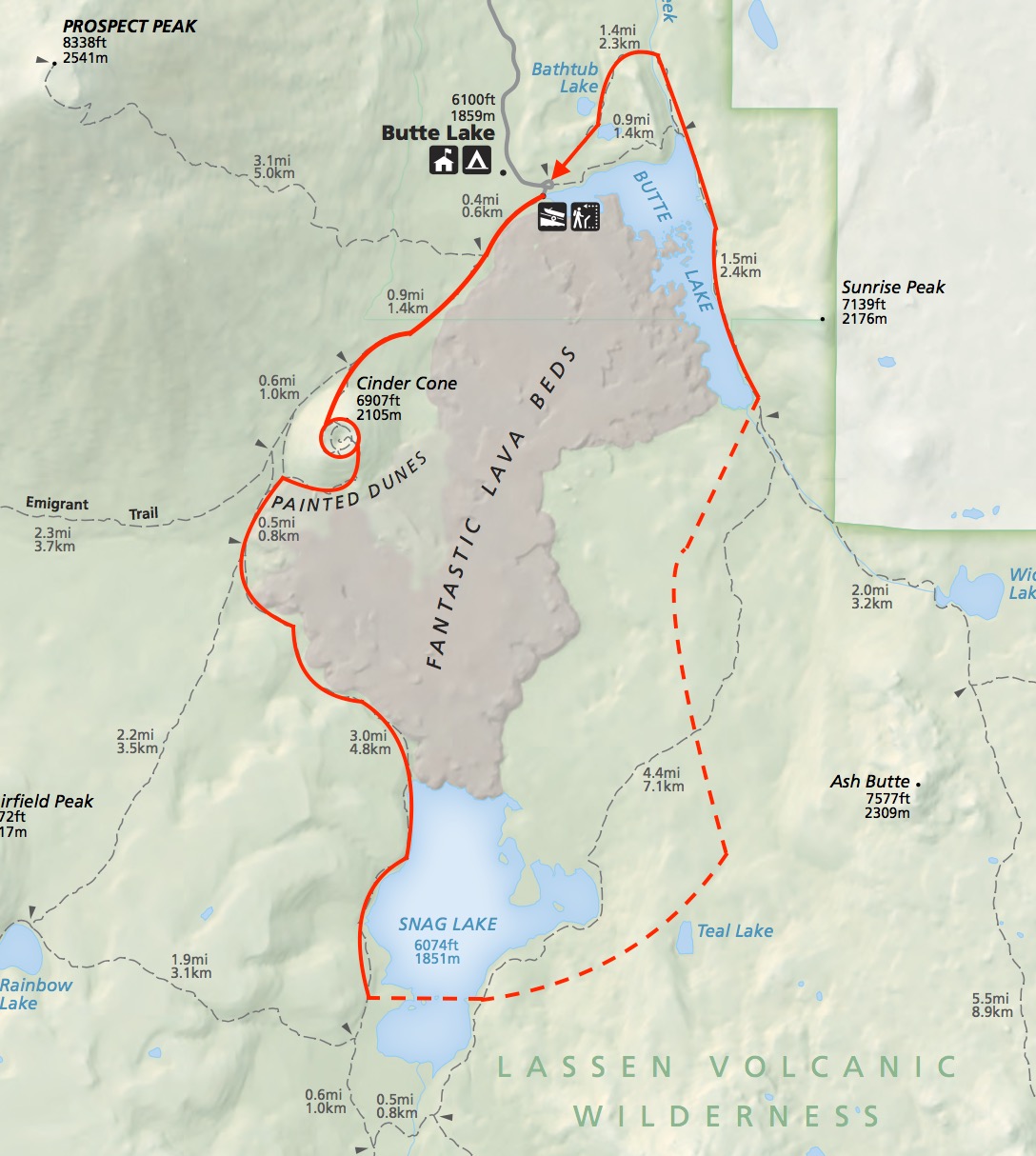 My approximate route, on the NPS Map. Dashed lines indicate off-trail hiking. I hiked about 14 miles.

I took a few steps towards the birds. My hiking boots got a little muddy.

A few more steps, a little bit more muddy. Well, they were going to need a wash at the end of this road trip anyway.

A few more steps and the hems of my jeans were muddy. Well, that’s to be expected on a hike. I was going to have to do laundry anyway.

A few more steps, and I was up to my ankles. Who cares? The pants were already muddy anyway.

A few more steps. About a third of the way across. Up to my shins. Well, what’s the difference at this point.

A few more steps. The mud is up past my knees.

This must be how animals got trapped in muck and turned into fossils.

It’s a good thing I tied my boots tight. Every step was a struggle as the mud fought to keep my feet.

I’m half way. What do I do? I can go back, but I’m half way! If I’m going to fight my way back, I might as well fight my way across. I use my hiking poles to probe ahead of me, ensuring they find the solid lakebed below the mud, and planting them for balance and leverage.

I manage not to fall.

I get across. I am soaked, and covered in mud up to my thighs.

I was lucky to be free. I hadn’t seen a single person for hours—since leaving the campground. Had I gotten exhausted, who knows if I would have been rescued.

I sat on a log for a rest. I had another snack and drank a huge fraction of my water. I was sweating, and my legs were tired. I swore never to attempt a similar crossing ever again.

Now, to find the trail. How hard could it be? It just runs along the lake!

But the water level is down, and “along the lake” ain’t what it used to be. I couldn’t find it. I don’t know how. If you walk away from the water, you have to cross it eventually! I missed it.

Once I realized I had gone too far I turned left, knowing that I would cross the trail again. There were many downed trees that I needed to climb over. Some hiking in relatively flat woods. Some traversable ravines.

Even watching closely, I missed the trail a second time. But at least this time I was heading back towards the lava beds, and even in the worst case would be making progress home.

I continued off trail.

I finally came to Butte Lake. The trail was unmistakable. Thank goodness.

I hiked another mile or two along Butte Lake, and looked for the shorter path back to the campground. I could not find it. Not so bad—only an extra half mile.

The hike back to the campsite from the edge of Butte lake was lovely. Pines, gentle hills, and two serene, hidden lakes.

I got back to the campground at about 6:15, and checked in with the Scottish couple.

I must have been quite a sight. Sun-dried mud from the waist down, sweat and sun from the waist up. They took one look at me and raised their eyebrows.

We were just starting to wonder where you were…

I told them the whole spiel. They shook their heads. They laughed. They went on about the folly of youth.

I went back to my campsite, pitched my tent in the last light, and cooked myself some rehydrated mountain chili. I slept very well, glad to be alive.